Ongoing strike: French strike starting tomorrow until the 21st of February @ 6h30 AM. Contact us 24/7 to find a solution to reach your destination.

Dassault delivered the first production Falcon 900LX in 2010 as a replacement to the 900EX. It is fitted with a variety of upgrades, including new wing designs and three new turbo fan engines, which serve to increase its overall performance, particularly in terms of its fuel efficiency and range, which has risen to 8800km. These improvements, combined with the recognizable and effective profiled winglets, also explain the maximum cruise speed of the Falcon 900LX, which is greater than both the Bombardier Challenger 850 and the Global 5000. Much like the 900DX, this aircraft is categorised as a Super Large Business Jet and offers the same extra-wide and long fuselage, similar in size to that of the flagship Falcon 7X. The modern interior is split into three separate zones and can seat up to 13 passengers and is not just spacious, but also luxurious and features WIFI and an MP3 system to provide an enjoyable journey. Comfortable, efficient and capable of connecting major cities, such as Paris and Beijing or New York and Moscow, the Falcon 900LX is a fantastic option for your flight. 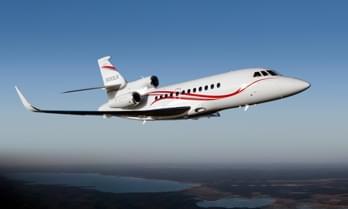 Listing of 38 result
Subscribe to our Newsletter
We Promise We Won’t Spam You!