The Falcon 2000S is very similar to its sister aircraft, the Falcon 2000LX as it is built around the same design and structure but, due to its reduced range and other factors, it belongs to the category of Super Midsize Jets. Like the LX, the 2000S offers a spacious, stand-up cabin, comfortably accommodating up to 10 passengers in a Club 4 arrangement and 6 individual seats. The main difference between them is the exceptional low speed performance of the 2000S, which is responsible for it having the greenest footprint of Dassault's entire Falcon series. This low speed performance also reduces the 2000S' landing distance to 705 metres, meaning that this jet has access to 50% more airfields than other aircraft in its class, enabling it to get you to more remote landing strips that are often closer to your final destination. 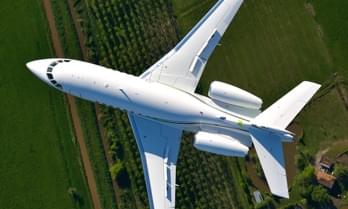