Announced in 1989, the first deliveries of the PC-12 occurred in 1994. Over the years, the PC-12 has continued to evolve, its latest iteration being the PC-12 NG with improved flight performance, launched in 2008. This single-engine turbine-powered aircraft has built a reputation for performance, reliability and operational flexibility. Capable of operating on short runways and unpaved surfaces, the PC-12 NG can reach many airports most private jets can’t, often allowing passengers to land as close to their final destination as it gets. A PC-12 NG in typical configuration can seat six to eight passengers; it boasts a refreshment centre, a fully enclosed lavatory and a luggage area to the rear of the cabin enabling in-flight access to the baggage compartment. Offering greater cabin space than most turboprops and Midsize Jets, the PC-12 presents a standard cargo door for voluminous luggage, motorcycles or surfboards. In addition to its executive arrangement, the PC-12 NG can also be set up to perform air ambulance flights. 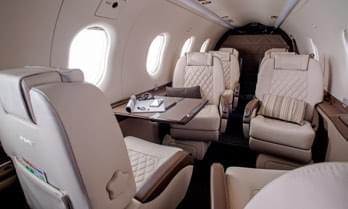 Listing of 17 result
Subscribe to our Newsletter
We promise we won’t spam you!