Cessna launched the first model of the Citation Excel series in 1998, improving the performance of the aircraft and enhancing the cabin’s comfort ever since. The XLS is the new version of the Citation Excel, flying faster and farther than the previous models. In 2008 a number of upgrades resulted in the XLS+. The latter boasts the greatest range of the Excel series’ Super Light Jets, able to cover non-stop flights of over 3,500 kilometres. Its spacious cabin welcomes eight passengers on six high-quality, fully reclining leather seats and a two-person divan while a high-density seating configuration for up to 12 is available too. Being able to land at challenging airports and use short runways, the XLS+ allows travellers to touch down as close to their final destination as possible and represents a popular choice for short-haul flights. Even though it is capable of transcontinental range, our clientele often uses this jet to travel across Europe, for business trips or leisurely weekend breaks. It holds a top cruise speed of 817 kilometres per hour and a maximum range of 3,889 kilometres, but actual performance can only be determined on the day of the flight as it depends on various factors such as weather conditions, chosen aircraft configuration or payload. 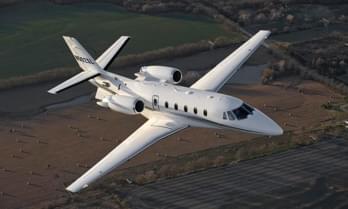 Listing of 16 result
Subscribe to our Newsletter
We promise we won’t spam you!