Cessna began production of their most recent Light Jet, the Citation M2, in late 2013 to replace the out-of-production CJ1+ as the smallest Citation Light Jet, a step-up from the Citation Mustang. Featuring new avionics, an improved design and an upgraded engine, the M2 outperforms its predecessor in every department, offering a greater range, close, in fact, to that of the CJ2, and much better fuel efficiency. It also possesses an impressive maximum cruise speed, enabling it to travel faster, as well as further, than the CJ1+. The interior of the M2 caters for up to 5 passengers in a Club 4 arrangement and an additional seat in front of the door to the cabin and has a new, modern design which serves to make it more comfortable and spacious. Through the production of the Citation M2, Cessna have succeeded in extending their domination of the Light Jet market, providing an aircraft which is perfectly suited for intra-European service. 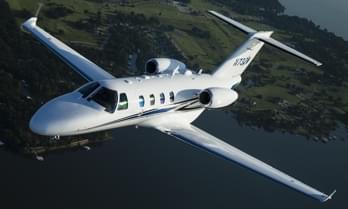