Honda describe the HondaJet a "the world's most advanced Very Light Jet" and with good reason. The first production HondaJet embarked on its maiden flight on 1st July 2014, by which time over 100 orders had reportedly been placed. The largest jet of its category, the Hondajet accommodates 5 passengers in its spacious cabin ensuring a comfortable short-haul flight. Its innovative design incorporates advanced technologies and concepts resulting in an aircraft that is not only easy on the eye, but also is the fastest and most fuel efficient jet in its class, partly due to the over-the-wing engine mount. Honda promise that their VLJ betters its rivals in range as well and will certainly be capable of intra-European direct flights, such as Paris to Ibiza or Geneva to Berlin. 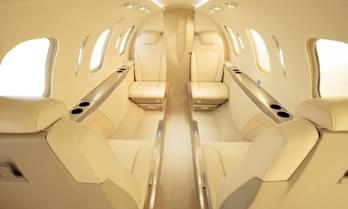