The Falcon 900B was first certified in 1992 as an upgrade to the Falcon 900 and belonged to the same category of Super Large Jets as its predecessor. Produced by French manufacturer Dassault, the 900B is also a tri-jet but is equipped with much-upgraded engines to the original Falcon 900, enabling it to produce more power and operate with greater efficiency, serving to largely increase its range. Like the 900, the 900B features a large stand-up cabin that typically seats between 10-12 passengers in a comfortable executive seating configuration but can accommodate up to 14. The Falcon 900B is the first variant of the Falcon 900, which was repeatedly upgraded to create a whole range of Dassault aircraft that have excelled for over 30 years among other intercontinental business jets. 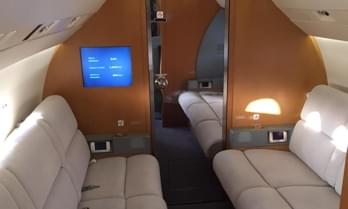