Gulfstream launched the GIV in 1985 as a much-upgraded and larger version of the GIII. The GIV’s intelligent design, stylish exterior and powerful engines help to explain the aircraft’s popularity and why its production lasted nearly 20 years, during which time it succeeded in setting over 50 world records for round-the-world flights. The GIV’s impressive range, reliability and overall performance, along with its large stand-up cabin mean that, unlike its predecessors, it is categorised as a Super Large Jet. The spacious interior typically accommodates 14 passengers in optimum comfort but, in certain configurations, the GIV can seat up to 19. Gulfstream’s most recent aircraft, including the G450, G550 and G650, are all modelled from the original GIV, a true testament to an aircraft that set the standard in its class for so many years. 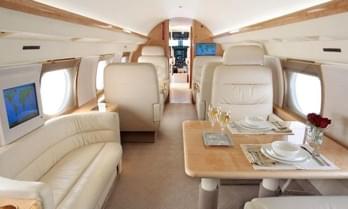